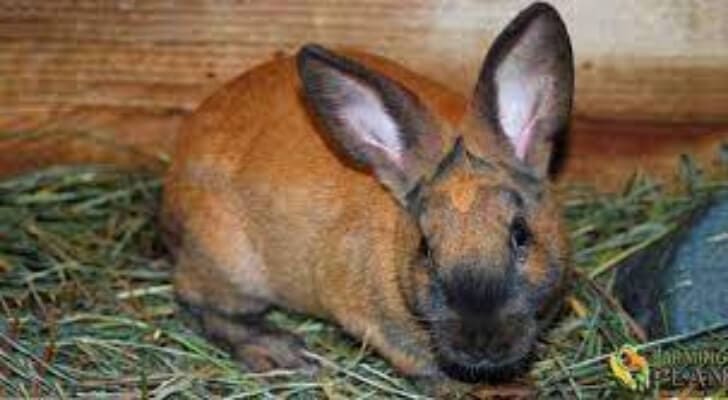 The story of how the cinnamon rabbit breed was created is somewhat comical since it is due to children who raised several species of rabbits together. These children were the children of Ellis Houseman, they took their new creation to a 4H fair. The Cinnamon rabbit appeared thanks to the crossing of multiple races. Among them are White New Zealand, Chinchillas, Checkered Giants, and Californians and developed in Montana, United States.

First, it was started by crossing a white New Zealand rabbit range with a rabbit of the chinchilla breed. Then we proceeded to cross with the giant Checkered rabbit with a Californian rabbit range. The breeding of the two crosses results in the cinnamon rabbit, which was introduced in 1969 at a demonstration in Calgary, Canada. The product of these crosses was established and approved by the associations in 1972, becoming a highly commercial breed.

The cinnamon rabbit is a large breed, which is why its weight is between 4 and 5 kgs. Usually, this race is the tan color with certain shades of gray. The gray color focuses mostly on the area of the back and belly. In the same way, it has shades of bronze color that cover the legs. It has a characteristic mark on the nose that has the shape of a butterfly. While the face, ears, feet, legs, and tail have a dark gray or black.

The name of this breed of rabbit is given by its cinnamon color as it is its most characteristic feature. In addition to the gray cinnamon color in the gut. Cinnamon rabbits have bright brown eyes and their bodies are of medium length. Their legs are proportionate with the rest of the body and are straight and chunky. They have a short neck, and a voluminous, rather flat head, with bulky cheeks. Their ears are straight and end in a slightly rounded shape.

In its hair, there should be a clear mark boundary between tan and straight. The color is cinnamon with mottled gray on the back and gray on the belly. It has rust color spots on the inside of the legs as well as a butterfly mark on the nose and circles in the eyes. It is also present in the ears and extends throughout the part under the chin. Also, its hair is fine, shiny and short, and can be kept brushing on occasion. Although it tends to have times where the hair dies so the brushing should be done every 2 weeks in those seasons. It is generally quite calm.

The Cinnamon rabbit has no food restrictions, it can even be maintained as long as you have a healthy diet. You can feed on hay and certain vegetables, which will help your growth, and keep it big without being obese. You may also like to read Belgian Hare Rabbit.

The rabbit Cinnamon is a lovely show animal with beautiful and bright hair and a breed that is used for commercial use. It is a multipurpose breed since it produces both to obtain the skin and to produce its meat. Whoever can produce meat is due to their predecessors, the different races that were used for their crossing gave rise to a high meat-producing breed.

In the same way, due to its peaceful nature, it is also raised as a pet, although because it is a new breed, it is not so easy to find. There are also people who raise this species to show it in exhibitions, its size and the color of its skin attract attention. You may also like to read New Zealand Rabbit.

The cinnamon rabbit is a self-sufficient breed since it can be outdoors and look for its own food. So it is a perfect breed for people who are beginners in rabbit breeding. Besides that, it is a peaceful and friendly race, and it develops very well close to people. They are perfect for people who have children in their homes. Also because it is a large and muscular race will not hurt if children drop it. This breed does not require special care, needs spaces to run, be sporadically clean.

Being a rare breed it is difficult to get and even placed in the list of races to conserve. And although it has to be conserved, it is not a race that enters the races that are in danger of extinction. Although there are only a few hundred copies of this breed. That is why there are several foundations that seek to protect, care for and reproduce this breed, and thus maintain this species. You may also like to read Silver Fox Rabbit.

So, what does this all mean for you? If you want to raise your own Cinnamon rabbit pet or need one that can withstand cold temperatures better than other breeds, the only way to do so is by breeding a couple of them together. The best part about raising these furry critters is that they are very friendly and low-maintenance pets who love kids! You might even enjoy it more than owning chickens (I know I would). Be sure to check out our blog post on how we created the first cinnamon rabbits if you’re interested in finding out how they got their start!