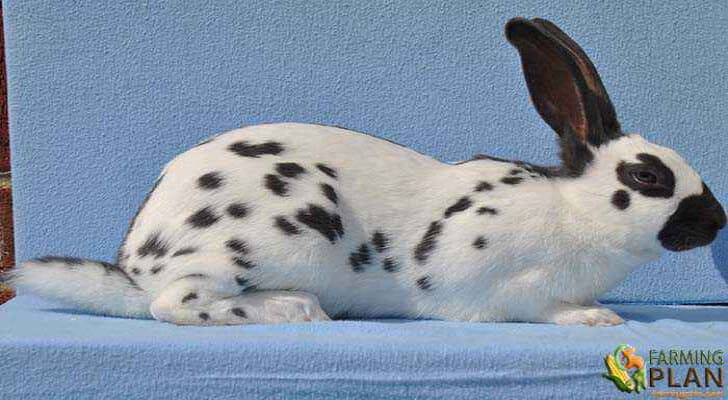 The English Spot rabbit is also known as butterfly rabbit. The main characteristic of this breed is its spotted fur. Its most characteristic spot is what gives the race its name in Spanish since in the area of the nose it has a butterfly-shaped spot. This breed has been quite common in England since the mid-nineteenth century, being imported to the United States of America back in 1910.

Years later, on American soil, the American English Spot Rabbit Club would be founded. The origin of this breed of rabbit is found in the 1950s, through crosses of spotted rabbits of French and German origin. From these rabbits, the English developed a markedly domestic rabbit. In 1910 the race was exported to the United States, although the race that developed later on the new continent differs from the original English race.

This is one of the oldest breeds of the company, also being one of the best. This makes it present in homes around the world. Although nobody knows exactly where it came from, it is believed that it shares predecessors with the Giant Checkered. Pretty likely, both have spots on the cheeks, butterflies, circles in the eyes and color in the ears. The Checkered is simply a larger rabbit with a different pattern of spots.

The English Spot rabbit is a small-sized specimen with a weight of around 2-3 kilos. The spots on his coat are the most characteristic features. These include the spotted ears, the line that runs all the way back to the tail. They have an arched body, with a robust head in which are strong and erect ears. The back is slightly arched. In addition, the hips are well-rounded and slightly wider than the shoulders. The legs are long and thin. The ears are vertical. You may also like to read Californian Rabbit.

It must present six types of marks on the body:

Its fur is short and dense. As a rule, they are very affectionate and very curious rabbits. They are very active animals that always want to play and interact with the environment, so they need to spend many hours outside the cage. These characteristics, together with its appearance, make it one of the most appreciated domestic rabbits.

The rabbit spot rabbit reaches its sexual maturity between the seventh and ninth months. They usually have between 3 and 6 bunnies with a gestation period of 28-31 days. 25% of the offspring will be a solid color, 25% will have partial marks, and 50% will have all the required marks. You may also like to read New Zealand Rabbit.

Babies partially marked “typically have a mustache similar to Charlie Chaplin” and are therefore called “Charlies”. The females have an exemplary mother character with their children, even taking care of rabbits born of other mothers.  In addition, the calves from 60 to 70 days old weigh 1.7 to 2 kg., They are abundant and tasty meat, it is considered a precocious and fertile rustic breed.

English spot rabbits despite their small size, these rabbits have a voracious appetite. As with all other breeds of rabbits, hay is their main food in the diet, just like vegetables. They are good eaters but new foods should be introduced gradually. To avoid the risk of rejecting the new food or even stop eating. Certain vegetables such as cabbage, lettuce, and broccoli should be avoided.

Since they produce gases and, in more serious cases, gastrointestinal problems that can be fatal to their health. The same goes for foods like potatoes or corn. The English spot rabbit, like most domestic rabbits; eat hay, oats or barley, balanced food, and carrots. They also require a constant source of freshwater to drink.

The English spot rabbit has a docile nature, so people choose to have it as a pet. In addition, some breeders raise it to produce their skin, and also to produce its excellent meat that has a good flavor.

English spot rabbit It’s a friendly and very curious race. Very alive and energetic, so they need exercise every day. They are also playful and sweet. The English spot rabbit is active in the morning and in the evening and sleeps during the day. You may also like to read Belgian Hare Rabbit.

Thank you for reading this blog post, and good luck with your new pet! If the English Spot Rabbit is not quite what you were looking for, we have many other breeds to choose from that may suit your needs better. Our goal is to make sure everyone has a happy home full of love. Contact us today if there’s anything else we can help you find!