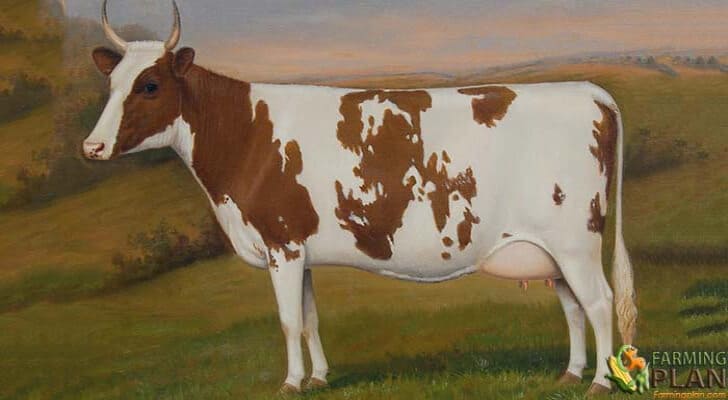 Ayrshire Cattle is a breed native to the southwest of Scotland in the northern part of the county of Ayr. This county has an open and undulating topography, which becomes slightly mountainous in the east. The soil varies between sandy loam and heavy clay of moderate fertility, and there are also poor hill soils. The maritime climatic conditions that constitute the natural environment in which this race lives have a wide margin of adaptability.

As evidenced by the diversity of climates in which it has been successfully introduced in other countries. Previously this race was also known as Dunlop or Cunninghame cattle. It has been exported to all parts of the world. In the mid-eighteenth century, the indigenous cattle of Ayrshire were small, lower, black, or pronghorn in black or chestnut and irregularly shaped.

And these animals were later crossed with Teeswater Shorthorn and Dutch cattle imported into this area, the breed being established at the end of the century. In addition, Alderney cattle were imported into the Dunlop region around 1800 and influenced the evolution of the Ayrshire.

A normal adult specimen of Ayrshire breed if female weighs between 450 and 550 kg on average and the males weigh up to 830 kg. The typical color of the race varies between red, orange and dark brown, the legs can be both color and white. Its main characteristics are low levels of leukocytes and this is a measure of the quality of the milk. You may also like to read Limousin Cattle.

This breed has great conversion efficiency from pasture to milk and its physical resistance. The strengths of the breed are considered its calving ease and its longevity. They are also very fiery in nature, which depending on the case may be a desirable or negative feature. This race can inhabit from the hot plains to the high altitudes. Whether they are exposed to temperature changes from + 30 ° C to -30 ° C, it does not matter

Ayrshire Cattle thrive under all types of weather and in all types of terrain. Beat high altitudes, in humid climates, in excessive heat or in the excessive cold. A healthy Ayrshire cow ignores the environment that surrounds it and pays its expected milk quotas as befits a good dairy cow.

The average production varies between 14 – 15 kg of milk per day with a percentage of fat of 4%. The duration of breastfeeding is 305 days. And also has an interval between deliveries of 399 days approximately. The typical Ayrshire Cattle has a very good temperament. Learn your routine with ease, it is easy to milk and milk quickly. It is truly the ideal cow for work. You may also like to read Simmental Cattle.

One of the great advantages of the Ayrshire is the ease with which they convert their food into milk. It is a known fact that Ayrshire Cattles are large producers of milk. Either in a dairy under sophisticated management systems or under the most basic systems of grazing land.

A typical Ayrshire Cattle will transform any food you eat into the milk of good quality while remaining in good physical condition. It goes where there is food available and it does not stay at home when they come to feed it. If you have to walk great distances to get to where your food is, be assured that you will arrive and eat.

The Ayrshire cattle breed is bred especially for the dairy industry. And this is because this breed produces large quantities of milk and of good quality. In addition, it is a strong breed so that breeders seek to breed and produce this breed.

Ayrshire Cattle are strong and of good body condition, so they adapt easily to environmental circumstances. The Ayrshire cattle are famous for the quality of their udders, which have the ideal texture for easy and healthy milking. Another advantage is the robustness of its legs and feet. Since the percentage of Ayrshire cows that suffer from pedal problems is much smaller than that of any other breed.

This is a very important factor, particularly in operations where cows are kept standing upright in the barn for 365 days a year. The cows that have good legs and feet are those that enjoy a long productive life. Ayrshire Cattles are a strong breed with a clear determination to live. Their constitution is robust and they resist the stress generated by production demands very well. You may also like to read Charolais Cattle.

It is precisely this robustness that helps them resist diseases and produce well for many lactations. The Ayrshires can easily give birth to their calves without needing help. There is no farmer who does not tell him that they rarely have to help an Ayrshire Cattle in her birth.

If you’re looking for a breed of cattle that are known to produce large amounts of high-quality milk, then Ayrshires may be the perfect fit. The average adult cow weighs about 475 kilograms and can live up to 20 years old. They are usually red or white with some black markings; their color ranges from orange to brownish-red in hue. Read more below on how this specific type of dairy cow came into existence and what makes them so special! Hope this guide has helped you! Good luck