The rabbit belongs to the family of mammals considered as one of the exotic invasive species that annually is responsible for ending a lot of crops. It has a territorial behavior encompassing extensions of the land of less than 15 square meters (and may even be 1 or 2). Before we talk about where rabbits live, let’s get to know more about these little rodents.

They usually live in burrows with between 6-10 rabbits of both sexes. It also establishes a hierarchy of dominance in which the males are positioned above the others to determine who has priority to be able to mate. It is an animal that has nocturnal habits; They are usually very silent but sometimes they can emit a whole series of screams at the moment they are injured or scared. They are usually communicated through physical contact and smell.

The moment he encounters a predator he prefers to sit still with the intention that he can not get to see him; However, if you have to run you have well-developed legs for it so not many animals are able to achieve them.

Rabbits tend to live in areas close to sea level. They prefer the sandy soils that favor the construction of their burrows. They also like forests or in areas of bush because they also serve to hide. When adapting to human life, we can see them in squares or parks even live in cemeteries, although they usually opt for extensive fields.

A few years ago they preferred the man’s farmland. Nevertheless, the new techniques of agriculture today are in charge of destroying all their burrows so they have had to choose a new place. This species has adapted to such inhospitable terrain as turf fields, parks or even cemeteries. They feed mainly on lettuce, roots or grains that they have extracted from the crops of humans.

For breeding on farms or production sites, rabbits are housed in cages or rabbit hutches, which are normally housed in buildings or ships. Males are usually separated from females, as are young adult rabbits. In some European countries, there is a growing tendency to locate cages in open spaces or use pens to allow animals to eat grass in addition to concentrated feed.

Domestic rabbits are bred in specialized areas to ensure they live in the best conditions before being marketed in the market. We can find them in the usual establishments. A domestic rabbit, logically, lives in our house being able to adapt both to country life and an urban environment. It needs special care and you have to keep in mind that, as a good rodent that is, you can easily end up with your furniture without intending to. They are similar in a sense to another small rodent that is also used a lot as a domestic pet, the hamster.

Another pet with which it is often compared much to have certain similarities is the ferret. This is because their care is similar, and have a similar morphology.

The life expectancy of a rabbit depends on many factors, among which we can highlight the special one to which it belongs and if it is a rabbit that lives in freedom or does it in captivity. And is that the rabbits living in captivity get to live up to 10 years or even longer if they enjoy the good care and veterinary care. However, the most normal thing in dwarf rabbits is that their life expectancy ranges from 6 to 8 years. We must bear in mind that these figures will be reduced in the case that we are referring to rabbits that live in freedom.

The rabbit is almost always twilight habits; However, on hot days it is frequent to meet you from noon or even throughout the morning. He lives in colonies that tend to build labyrinthine underground galleries, called rabbit hutches.

Scientists have highlighted the great importance of the rabbit within the Mediterranean biome. It can be said that it is the key and the link in the food chains as the main advantage of energy from all corners, degraded and that channels perfectly to predators who are the most carnivores of our latitudes ( Wolf, lynx, fox, cat mounts, jineta, weasel, ferret, wild boar)

The ecological importance of the rabbit has been palpably demonstrated at the onset of tragic myxomatosis, which has caused not only the rarefaction of the species but also a great impoverishment of the populations of large raptors and predatory mammals.

The ecological scheme refers to the micro-community of mammals in the Mediterranean forest. In fact, the prevailing pattern of birds and some reptiles on the rabbit gravitates, which increases its ecological importance.

The rabbits live grouped in colonies composed of several clans that defend their territory against any aggression and, above all, delimit the borders to prevent the entrance to congeners of other neighboring territories.

Organization of each clan of rabbits. The borders are fixed of actually. The rabbits use the secretion of some glands that have in the chin to impregnate the borders of their territory. This frequent activity is known among scientists with the name of Mentone.

The identification of the components of a Vivar and the territorial demarcation is made by the smell. The urine fulfills a homogenizing mission because it spits males and females and is a constant deposit of this liquid in the territorial confines.

Vivar is a complex network of galleries with several access routes, where a group of rabbits takes refuge. In many cases, Vivar extends on several levels and can reach enormous complications with overlapping galleries.

What size Rabbit housing is best?

Bigger is better when it comes to bunnies! A rabbit’s home should be at least 4-6 times the size of your bunny, and more if he’s confined for large amounts of time. Enclosure sizes also need determining in conjunction with what exercise space they will get; one guideline set by experts suggests 8 square feet combined with 24+ sq ft. This amount can vary depending on how much playtime your pet has each day (1-2 rabbits require about 5 hours).

We hope this guide has helped you in deciding what enclosure size to get for your rabbit. Don’t forget that the bunny should have at least 8 square feet of space combined with 24 square feet of exercise space, and 5 hours per day outside the cage! If you are still feeling unsure about how big an area is necessary, consult a professional or call us here at Bunny World; we can help make sure your bunny is happy and healthy.

As A Reference: Rabbit Housing 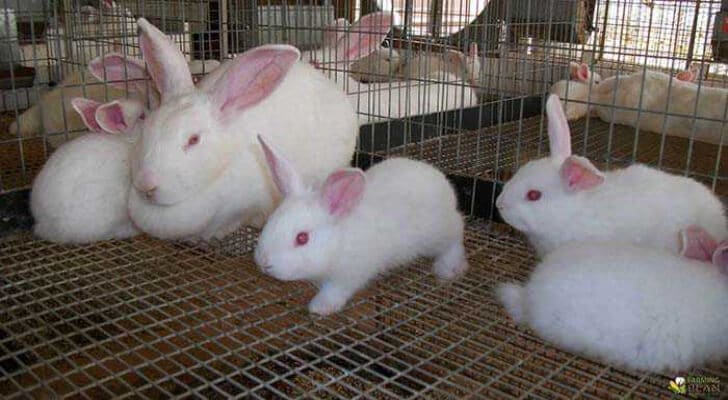