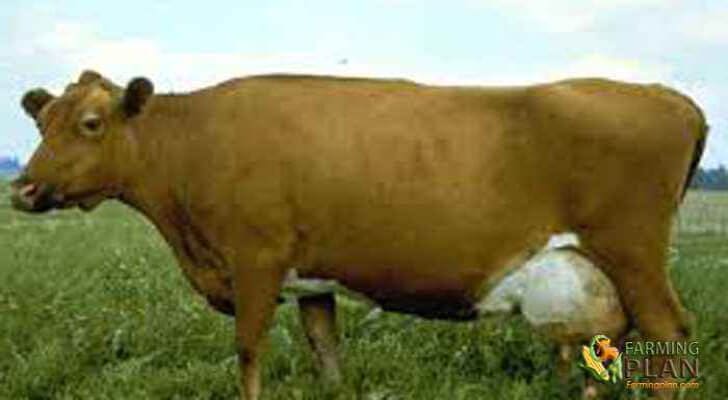 The Finnish breed has evolved from the native Finn cattle of the country. Which are similar to other indigenous strains of northern Scandinavia. Given that in the country no remains of primitive cattle have been discovering.  It can be assumed that these animals penetrate from other areas. Systematic breeding actually began at the end of the last century, but it has intensified more recently.

At the beginning of this century, when three genealogical books were established for the Finn cattle of the west, of the east and of the north. These groups of animals were of different colors: chestnut, brown and white, and white, respectively. The main difference that was insisted on was the color of the layer, less attention to the variations in conformation and productivity.

The three breeds were combined resulting in the Finnish breed but, taking into account the variations in color, no limitations were imposed on this characteristic. Since then these three original strains have been intermingled and the chestnut color has spread throughout the area of chestnut and white and white cattle. In fact, the Finnish white north type has been largely eliminating lately. Nowadays the animals are brown or chestnut with white marks on the back, belly, legs, and head.

The Finn cattle breed has achieved great success in countries like New Zealand, where they demonstrated their great ability to convert grass into milk. The bulls and their children are continuously at the top of the New Zealand ranking by production. They also had a lot of acceptance of the breed in the USA. With Sweden, there has been a major blood exchange for decades. Where they used many Finnish bulls in the Red Swedish race and vice versa.

Although the Finnish race has maintained the purity of its origins. Not allowing the use of bulls with less than 75% purity of the breed. The Finn cattle are scattered throughout the country, except at higher altitudes, and the density is highest in the eastern and northern interior farms of the country. Ordinarily, cattle are kept at altitudes between 50 and 400 m. Along the Baltic coast, the low plains have sedimentary clay soils of good fertility.

But most of the interior of the country are moraines along with minor extensions of clays, mounds, and plateaus. The animals of the Finnish race are medium size, strong build, skinny musculature, resistant and healthy. It is a cattle without horns with a pointed head. The layer is a uniform chestnut color or with white markings on the back and belly and also on the head and legs.

To date, little selection has been made regarding color variants or individuals segregate with horns. The head is short with a straight or slightly convex profile and the forehead is concave. The back is in decline from the cross to the birth of the tail and the rump is long and somewhat descending. You may also like to read Simmental Cattle.

While the ventral line is lower back than in the chest and gives the animals the typical cuneiform appearance of dairy cattle. Also, the average body conformation and live weight vary somewhat among the original races.  And when they merge into a single new race differences arise between individuals of the Finnish race that can be quite considerable.

The summer grazing period lasts about four months in southern Finland and one month less in the northern regions. Due to this short pasture time, feeding and livestock care are more expensive in Finland than in many other European countries. Established livestock and feeding practices also influence the average body size. But since these animals have evolved from primitive parents, they are extremely resistant. You may also like to read Dexter Cattle.

The Finn cattle are exploiting primarily as dairy cattle. And the heifers stop for the first time at the age of two or two and a half years. Due to the relatively high production costs, it has been mainly trying to achieve good dairy yields from the first farrowing. Cows live a long time and can keep their production levels at their old age. The average age of the dairy herds is 8 and a half years. The bulls make their first cover when they are about two years old. And are uses until they are 7 or 8 years old.

The majority of Finnish herd bulls are formed by an insufficient number of heads. To justify in them the presence of bulls and since the beginning of this century groups of 15 to 20 owners of flocks established cooperative units for the maintenance of bulls. A bull serves in common to all herds and its cost is thus divided among the components of the consortium.

Before adopting the artificial insemination program, there were about 2,500 groupings of this kind. In 1959 the breed had become the largest dairy breed in Finland and the Nordic Selection Program was launched. The bulls were evaluated not only for the milk production of their daughters but also for their functional traits. A selection by which the Nordic red races were precursors in the world. Currently, Finland has 152.000 cows in official dairy control. And there are about 191.000 rows in total, which makes this rodeo the largest pure rodeo in the world.

The Finnish cattle breed is not indigenous to the country but has evolved from the native Finn cattle of Finland. It can be assumed that these animals were imported rather than being developed in-country because no remains of primitive cattle have been discovered. Systematic breeding actually began at the end of the last century, but it has intensified more recently. Nowadays there are several breeds and types within this category – each with different characteristics for various purposes such as dairy production or beef quality.