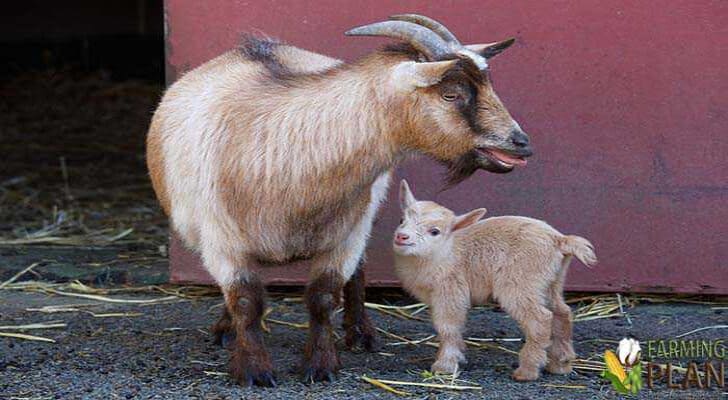 The Pygmy goat spread to Egypt and Sudan by people who gradually moved south. The first goats have domesticated about 10,000 years ago in the Middle East in areas now known as Israel, Iran, and Iraq. The indigenous tribes of Africa kept them mostly for meat and milk. It is believed that the small size of the pygmy goat allows it to survive on lands unsuitable for sheep and other cattle.

They are small for two reasons. They were raised selectively for their small size and also because extreme heat and harsh conditions prevented their growth. Also known as African goats, they are a breed domesticated and developed for centuries by the tribal people of Africa.

It was imported into the United States and Europe in the 1950s. This breed has become popular as pet and pet for children because they are small and easy to handle. They are becoming increasingly popular as pets, especially for exhibits and the personal enjoyment of fans and lovers of the field.

The Pygmy Goat is one of the smaller races its size does not exceed 45 cm. High. The males can weigh up to 40 kg, but generally, their weight is from 18 to 30 kg. The coat is usually stained without ruining any color. The hair is smooth and generally short. Both males and females are animals armed with horns although occasionally can be born many animals. Males have a much larger antler than females.

One of the peculiarities of the male horns is that they can be in a spiral form which is the original form of the breed. African dwarf goats can be mothers very early at 6-8 months of age. They can breed throughout the year and stop between one and two young and sometimes three weighing about 900 grams each.

The gestation lasts approximately between 140 and 160 days with the majority of the births to 150 days. It is recommended that females do not raise until they are one year of age. Early reproduction can cause significant problems for the female.

The Pygmy goat feed is simple since a little alfalfa hay or any other type, and a little feed, either commercial concentrate or a mixture of cereals, will suffice. They tend to graze the grass but also eat the tender shoots and bark of the trees. African dwarf goats are dining but also somewhat selective, choose their food for taste and smell.

The Pygmy Goat is a very intelligent animal and can be trained to do some circus work.

The Pygmy goat generally has a longevity of 10 to 15 years. A characteristic of the goats is that they present fleshy appendages in the base of the jaw (behind the beard) that receive the name of “mamelas”. They enjoy the company of other goats; Are social animals, agile and determined climbers that can even climb the branches of a tree. In addition, they are incredibly curious, which can cause us some damage if it escapes us from the enclosure or we put it in the house to play with her.

If you’ve been searching for a miniature goat breed, the American Pygmy may be just what you’re looking for. As one of the smallest breeds in America, this is perfect if your goal is to have a small pet or farm animal that can fit into tight spaces and get around easily on its own without being too difficult to handle. Though they are not as prolific as some other breeds, it might be worth considering them if their size suits your needs and lifestyle! Did we answer any questions about this breed? Let us know in the comments below!