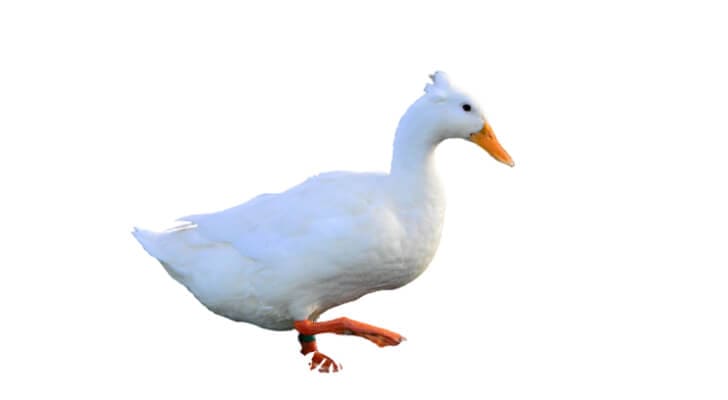 The Crested Duck has this name because of the plumage, both male, and female that remind a lot of a “pompom” in the head. Species of Europe and the United States, Pompadour ducks is quiet bird and has good eating habits common.

According to some historians said that it comes from Asia and they began to spread around the world by boat trips towards Holland. There are paintings in that country of the middle of the year 1600 where the upbringing of these birds was formed. Other historians claim that they originated in Great Britain.

The Crested Duck is a species that looks thin, but nevertheless, they weigh between 2.7 and 3.2 kg. They produce between 100 and 200 eggs a year, and the incubation period of this is 28 days.

In the United States, they recognize per level of perfection the black and white color of the crested duck. Although there are other varieties such as gray, buff and blue which have been developed by breeders.

Because the gene is lethal so that farmers can have healthy breeding of ducks of this species. What they can do without taking so much control is to seek pure male ducks without the ridge.

The females that if they have the ridge, this way Will guarantee the production of ducks with ridge but without generating the lethal gene. However, 100% of the birth of all eggs produced can not be guaranteed. And other species in chickens have been seen to generate the lethal gene.

The crests come in different sizes and shapes. Therefore, to generate the same ridge, it is necessary to preserve males and females that coincide in phenotypic characteristics. They are easy to raise and can be had in gardens, they are very popular as they attract attention. And they are followed by fans at the fairs where they are exposed to the ducks.

The Crested Duck feeds on leaves, algae, sprouts, insects, seeds, small fish, nuts, cereals and aquatic plants. It feeds day and night on the surface of the water and dips the head in the shallow water.

In captivity it feeds on processed foods placed in small quantities, they can be freely in lakes so the bird can swim and feed at the same time. One should be careful about feeding the birds because they all have the habit of the water, and can get to ingest things that cause the diseases. Small ducks can be offered chopped vegetables in strips.

The Crested Duck is a purely ornamental duck. People are attracted to this breed because of this variety. They have in the head, also because of their physical characteristics, and how long they are, this whole set makes them look elegant. In addition, this breed is produced by being good eggs laying and by its meat.

Crested Duck grows very quickly, and they produce excellent meat. The gene that is associated with the development of the ridge is associated with a deadly characteristic. Since of the 100% of the eggs that produce the female of this race only 30% will live. And of the 100% of the ducks that are born only 30% of them will carry the crest. In addition, a quarter of the ducks that are born with a crest die when leaving the shell because the crest does not form, and leaves the brain of the duck exposed.

The ridges that this species possesses are always born in the middle of the back of the head, and come out symmetrically, and are usually large. In fact, the crest is a fabric that has this race that covers a hole in the skull. This gene is also associated with neurological problems and seizures. In addition, in this race neck deformities are observed, or problems in the neck are also generated by the gene of the crest. They can live 20 years in the wild.

We hope you enjoyed this guide! If you have any questions or would like to share your Crested duck story, please contact us. Good luck with your flock of ducks and remember not to breed too many because they are large birds that need a lot of food!