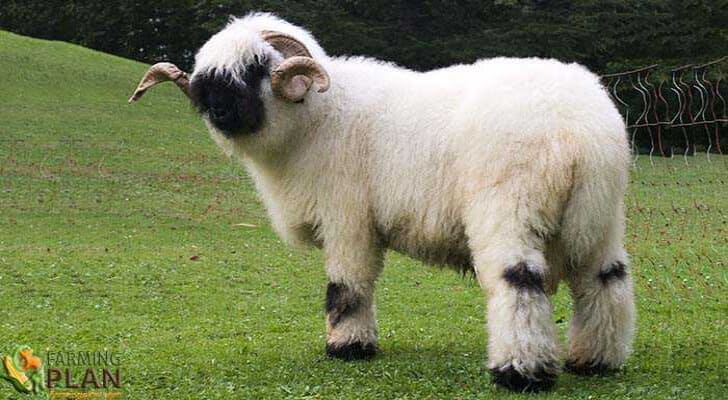 The Valais Blacknose sheep is an animal only found in Switzerland, in the Valis regions on the German border. From there comes its name, the place from where this species originates, and the color of its face. This breed already existed for the 15th century, but was not recognized until the late ’60s.

By the beginning of 1980, there were about 9000 individuals of this species. And by 2013 there were more than 17,000 specimens. The Walliser Schwarznasenschaf, the name with which this species is also known.

Valais Blacknose sheep is characteristic of his black face, which gives him that sinister aspect since you can not see his eyes. All its wool is white but his nose is black. In addition, it counts on beautiful horns that help to defend against him, the horns are in form of a spiral. You May Also Like To Read Katahdin Sheep

The horns are well separated, and sometimes they may have black stripes. It lives in a high mountain and produces 4 kilos of wool a year. These small rams, that can reach 100 kilos of weight have horns outwards that give them a wild and extremely curious aspect. Males and females of this species have horns.

Its most remarkable feature is the black of its face, ears, knees, and hooves; which contrasts powerfully with the rest of the white fur. These small, curious, woolly creatures even have giant bells around their necks. This breed is the result of a crossing made to create specimens that produced more wool and meat females of this species have white dots on the tail.

Farmers prefer to feed Valais Blacknose sheep with short grasses, as well as vegetables and alfalfa. The biggest source of food is getting the sheep to graze, between 7 and hours per day. In addition, another power source is grains and hay. A day should consume between 1 and 3 kilos of grains and enough water.

Some farmers include a bucket of salt inside the feed, which serves as a mineral supplement. Any variation in the diet of the sheep should be done gradually because if the farmers change abruptly the animals can suffer diseases. You May Also Like To Read Suffolk Sheep.

The Valais Blacknose sheep is a double-purpose breed. It takes advantage of its meat and also it’s wool. Its wool is much finer and more abundant than that of the traditional sheep. Another characteristic of wool of this species is that it is uniform throughout the body.

The spots on the tail of the female should not be large. Males should not have these spots on the tail. Another reason to disqualify this breed is if the teeth are not at the level of the gummy plaque. If they impart dwarfism. Or if the males have ruptured in the testicular sac.

It looks like an adorable animal but in reality, this animal is quite the opposite, they are very aggressive. A few years ago a campaign began in his native Switzerland to spread this breed to new grazing places in England. They bear very well the extreme conditions of arid zones of a high mountain. They are able to graze on the steepest and rocky slopes.

What happens is that they live in very cold areas and therefore need more coats than their other sheep cousins. At present these animals are in domestication and some people consider them more beautiful than the traditional sheep. The blackness of their eyes merges with that of their snouts and that causes them, seen from a distance, to give the sensation of having no face.

A characteristic that many people find disturbing. This species lives at 4000 meters above sea level. Over time this breed has created resistance to strong climates. So you can live in climates with extreme conditions.

Besides, that by the place of origin of this race is in mountainous places this race became accustomed to walking in mountains and rocky places. To this race, the hair grows to 10 centimeters. It should usually be shearing twice a year.

The Valais Blacknose sheep are a rare breed of animal, found only in the Valis region on the German border. It is dual-purpose and raised for its meat and wool which makes it an attractive option to farmers who want to diversify their operations. We hope this guide has helped you learn more about this interesting farm animal! Good luck with your farming endeavors by raising these unique animals that are not seen anywhere else but in Switzerland.